This is another one of those 'scratch an itch' projects - recently, was away from home and needed to dial back in to one of my home machines. It wasn’t something I was set up to do - so all I could do was wait till I got back home.

Once I got back home, I started looking into setting up a VPN server that I could use to dial home. My previous attempt involved a SSH tunnel and while it worked it was slow and frankly painful. And all that complexity and clunkiness was because my ISP (ACT Bangalore) uses CG NAT. This means that a single public IP is shared across possibly a large number of customers and so there’s no way to expose a server that you could connect to from the outside.

So the first piece of good news was that ACT is rolling out IPv6 in Bangalore…​ This is sort of a big deal since IPv6 address pools are much much more bountiful so you don’t need to resort to shenanigans like CGNAT. I raised a ticket with ACT and but was told that it isn’t ready and they have no idea when it’ll be rolled out.

Given that folks on Customer Support are rarely well informed, I thought I’d give it a try. On my router admin page, I changed IPv6 from 'Disabled' to 'DHCPv6 with Prefix Delegation' - and lo and behold, router got an IPv6 address! 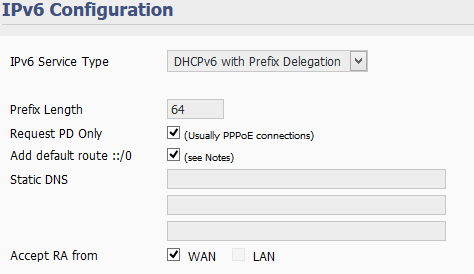 I run FreshTomato on my router - so OpenVPN was the first choice - and it sort of worked. I could reach my home network but couldn’t tunnel all traffic through the tunnel - specifically, IPv6 traffic was going over directly. Now, this wasn’t a big issue, but I did want to have the option of tunneling all traffic if I needed to. So that ruled out OpenVPN server on the router - and instead now Wireguard needs to run on a Rpi behind the router - that’s probably the only downside to this setup.

First order of business - we need to be able to reach our RPi over the Internet. Now, every time the WAN interface is brought up, the router gets a /64 IPv6 address and machines behind the router (like our Pi) also get a new address. We don’t want to type in an address and anyway it keeps changing so the first order of business is to create a DNS record for it whenever the IPv6 address changes. For this purpose, I have a shell script that uses CloudFlare API to update the address. Your might need to do something different based on the DNS provider you have but all in all, it would be very similar.

You’ll also need to run the DNS update script periodically - for this, I have a cron job to execute this script every 10 mins.

Setting up wireguard itself is quite easy - in fact, I’m just going to link to the guide I used that walks through setting up wireguard on the Pi with NAT. The only thing to keep in mind is that I do want name resolution (DNS) to work for machines in my home network - so I also push my DNS (Rpi running Pi-Hole) to the client. In my case, this is PiHole server running on my home network.

Opening ports on your router

You’d also need to tell your router to let IPv6 traffic on the wireguard port in to be allowed. You can do this on the router typically under 'Port Forwarding'

If you set AllowedIPs to 0.0.0.0/0, ::/0 then ALL your network traffic will go through wireguard. This isn’t something that I want always. In some cases, I need only traffic to home network to go via the tunnel and normal Internet data to go via the Wired/Wireless Lan interface.

My home network has a few different VLANs

Keep in mind that the entire setup depends on being able to send outbound IPv6 packets. This may or may not be true. My mobile provider - Airtel - for example, usually gives my phone both an IPv4 and an IPv6 (dual mode) addresses and things work just fine. But then - a couple of times the phone got only an IPv4 address and then it just couldn’t connect at all. The trick was to force IPv6 only in your phone’s APN settings and while this works when I’m home, I have no idea on how much of Airtel’s network is IPv6

The other thing to note is that this relies on UDP being open. Now the safest choice is to use port 53 which is normally used for DNS since that’s rarely blocked - but first make sure that port 53 is available on your Pi since by default, systemd-resolved takes it over (and for the life of me, I haven’t yet been able to figure out why I need systemd-resolved or how to get rid of it in favor of good ole /etc/resolv.conf)

So we have a RPi running wireguard inside your network that you can reach from anywhere on the Internet. Once you establish Wireguard VPN connection, you have a secure link back to your home LAN. You also get to choose, quite trivially, what traffic should/should not go over your tunnel.

It was my first encounter with IPv6 and I’m glad to be out of CGNAT hell. Wireguard’s a joy to setup and use.